Working in the appraisal business, we often have the pleasure of inspecting, researching, and valuing pieces of history. One such object that we have come across in the homes of several clients is the Chinese rank badge. These badges have become coveted collector’s items, but buyers must beware that new copies are being made and sold as antique originals. These badges are generally 11” x 11”. One thing to be alert of when purchasing is the smell of smoke. Many of the newly made badges have been smoked in order to give the appearance of age.

During the Ming (1368-1644) and Qing (1644-1911) dynasties in China, important men were recognized by the elaborately stitched rank badges displayed on the chests and backs of their robes. These mandarin rank badges were only earned after numerous years of intensive study, followed by three grueling rounds of examinations. There were two different groups who achieved badges, civil and military, each of which could be easily defined based on the image stitched on the badge. While each category had nine ranks, the civil badge

s featured birds and the military badges featured animals, both real and mythical. Within each group, each rank can also be identified based on the type of bird or animal. If one wanted to rise in the ranks, there were several ways to achieve a higher status, either through passing further exams, performing service worthy of merit, or purchasing a promotion. Although only men could earn rank badges, their wives were entitled to wear badges of their husbands’ rank for official occasions. In this case, the badges were mirror images of the men’s.

The Imperial family also wore badges on their robes, bearing phoenixes or dragons. Any other motifs, such as peonies or lanterns, were worn for festivals and ceremonies by palace courtiers, and later the Imperial court. Just like the civil and military badges, the specific image identifies the individual’s position within the Imperial family. Rank badges for the Imperial family and government officials originated in the decorative roundels sewed onto the front and back of the robes of Liao (907-1125) and Yuan (1279-1368) dynasty court officials. They were adopted by the Ming dynasty in 1391, and by the Qing dynasty in 1652, at which point a decree was issued that required all civil and military officials to wear their identifying badge on the front and back of their robes. 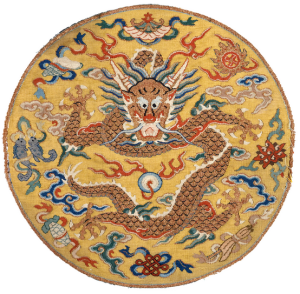 As a collector, is it more likely that you will come across civil badges of high rank. This is because those of higher rank were of higher wealth, and thus were able to purchase many more badges. Additionally, when the Republican revolution overthrew the imperial system in 1911, military men destroyed their badges so as not to be identified. Those of civil rank were incorporated into the new government and had no need to destroy their badges. We can be thankful to western collectors in the 19th and 20th centuries that a number of authentic badges still exist. Many of these collectors put the badges under glass, preserving them for later generations.

There are many more details involved in properly identifying these badges, check out http://www.pacificasiamuseum.org/rankandstyle/ for more information

Whether for insuring your valuable possessions, providing an equitable distribution of property to your heirs or maximizing your investments at market peaks, an unbiased opinion of value by a certified appraiser limits risk and provides for confident decision-making and personal peace-of-mind.